The Nul group was a collective of artists that manifested itself in the period shortly after the Second World War of 1961-1966. The artists Armando, Jan Henderikse, Henk Peeters and Jan Schoonhoven formed the hardcore of this group, which felt connected to the international ZERO movement that was developed in Düsseldorf. They shared an aspiration for a new objectivity in art. Herman de Vries participated for a shorter time in the activities of the Nul group.

The exhibition 'Nul' in the Stedelijk Museum in Amsterdam in 1962 was the first significant event in the Netherlands, organized by Henk Peeters. It offered a broad overview of the international ZERO movement with artists from France, Italy, Germany, Switzerland, and Belgium. In addition to various exhibitions in Düsseldorf, Paris, and Milan, a museum exhibition followed in 1964 in the Gemeentemuseum Den Haag. Under the title, ZERO-0-NUL, Armando, Henk Peeters, and Jan Schoonhoven exhibited together with the German Zero artists Heinz Mack, Otto Piene and Günther Uecker.

In 1965 the exhibition 'Nul65' took place, again in the Stedelijk Museum Amsterdam, in which artists from the Japanese Gutai group participated in addition to European ZERO artists. The exhibition showed a broad visual spectrum with international artists from the ZERO movement including artists such as Azimut from Milan, Zero from Dusseldorf, as well as New York-based Yayoi Kusama and American artist George Rickey.

The various artists' groups organized their own exhibitions and took care of their publications themselves, in which they took a stand against the established order. They wanted to break with existing structures and institutions and had unconditional optimism about the possibilities of technical progress. Exhibitions no longer had to take place in museums. The ZERO artists produced objects with modern industrial materials such as plastic, aluminum and consumer items such as lamps and motorcycles and created total installations with sound, light, and movement, and strived for the integration of art into everyday reality.

Zero means a new start, an idea, and a climate rather than a specific style or form; it wants to give up what no longer has viability, if necessary of the painting. The artist returns, inspiring common thoughts to almost anonymous works, who have little more in common with traditional art. Objects, surfaces, vibrations, structures, and reflections are created. (...) Not the banality of daily life, nor the laws of optical phenomena alone: ​​ZERO is the area between 'pop' and 'op', or to speak with [Otto] Piene: 'the quarantine zero, the silence before the storm, the phase of becoming calm and sensitive again.

With these words, Henk Peeters led the catalog in 1965 to the exhibition 'Nul65'. The art was stripped of its traditional appearances as a painting or sculpture. With the renunciation of the traditional media and the intrusion of art into reality, ZERO was at the beginning of a revolution in the visual arts of the sixties and was thus also a pioneer for minimal art, conceptual art, and land -art. 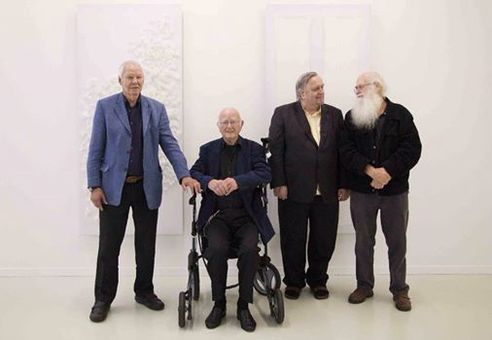 Henk Peeters (The Hague, 1925 - Hall, 2013) was the most active member of the Dutch Nul group, notably with regard to the organization; he made the international contacts, organized the international ZERO (Nul) exhibitions at the Stedelijk Museum Amsterdam, and wrote on the theory of art. Henk Peeters actively participated in international exhibitions with artist groups such as the German ZERO, the Italian Azimuth, and was a close friend with Yves Klein, Yayoi Kusama and Lucio Fontana. Until his death, Henk Peeters restored artworks from the ZERO period and remained an active spokesman for the Nul group. His archive from the sixties with interviews, correspondence, and printed matter is online​: Henk Peeters Archive >>>

Jan Schoonhoven (Delft, 1914 - 1994) worked at the Central Department of Buildings of the then state-owned company PTT. The artistry of Schoonhoven took place in the evenings and the free weekends. He opposed Cobra and strove for an objective art, which was stripped of any emotional value and in which the presence of the artist as a person was erased. For his works of art, he used materials such as rib-cardboard, paper-mâché, and toilet rolls. He was a founding member of the Dutch Nul group. Website under construction

Herman de Vries  (Alkmaar, 1931) was trained as a botanist and worked  at the Institute for Applied Biological Research in Nature, Arnhem. In 1953 he began exploring art; including informal paintings and ready made works. His paintings evolved from black to white. In 1961 De Vries joined the Nul group and with Henk Peeters and Armando he published the magazine nul=0. After two editions the editors broke up and De Vries continued the magazine by himself. He started to use the random principles to create drawings, books, graphics, sculptures and installations. From 1975 onwards De Vries his focus becomes the presentation of nature as the ultimate work of art. In many statements de vries indicates that ZERO is always his leading concept. Website >>>

Jan Henderikse (Delft, 1937) was one of the co-founders of the Dutch Nul group. Of this group, he is the one who worked with industrial products, pronounced waste and discarded materials. He is not the man of the theory of the ZERO, but of doing and making; Henderikse saw himself as the artist with the lowest 'ZERO content'. In his work the emphasis was on the impersonal in art, the objective, with unusual materials such as cents, packaging and corks. At then end of the sixties he started working with 'rejects' (rejected photographs from laboratories, advertising posters, etc.) that made his work more connected with the French Nouveau Réalisme from Arman and Daniel Spoerri. Henderikse lives and works in New York and Antwerp. Website >>>

Armando (Amsterdam, 1929 - Potsdam 2018) studied first art history for a number of years to join during his studies the Hague Post magazine as a journalist, so become chief editor of the arts. He remained connected to this weekly magazine until the end of the sixties. As a visual artist he was part of the Dutch Informal Group founded in 1958 by Jan Henderikse (including Kees van Bohemen, Jan Henderikse, Henk Peeters and Jan Schoonhoven), who merged in 1960 in the Dutch Nul group. As a poet and artist he was involved with magazine De Nieuwe Stijl and Gard Sivik. When he decided to stop his activities as Nul artist he worked as journalist, made theater, produced television, played music and wrote about sports. ​Website >>>